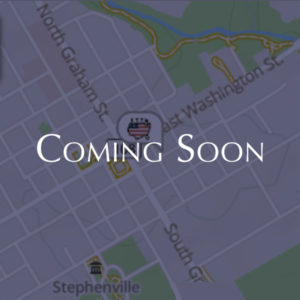 The façade, or south elevation of the hotel along W. College St., features a central entryway topped with a rounded canopy. The sidelights and transom around the door are enclosed with wood. Four bays flank each side of the entry and are now enclosed with wood, although first-floor windows on the west elevation are filled with double-hung wood windows. Nine bays on the second floor of the south elevation are filled with metal windows that feature a vertical fixed pane alongside a double-hung window. Nine bays on the third floor of the south elevation are either open to the elements or boarded up.

The Long Hotel offered air conditioning, a first-floor grand lobby with terrazzo tile, a dining room, and kitchen. In 1948, 40 guest rooms accommodated visitors who paid $2.25 and up per night to stay at the Long Hotel.

Located one block southeast of the Erath County Courthouse Square, the Long Hotel is next door to a bus station built between 1930 and 1949. Over the years, various cafes and restaurants served customers from the first floor of the hotel, and during the 1970s, a dinner club offered dining followed by dancing on the third floor. The hotel has been vacant since the late 1970s and is deteriorating from neglect.