By Tony Rhodin | For lehighvalleylive.com

The “Commodore of Easton” project will begin construction this spring at Northampton Street and Larry Holmes Drive in and around the old Kaplan’s Awnings building, the developer says. 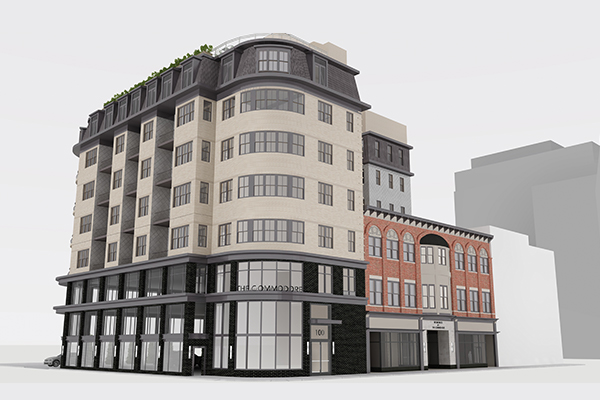 The eight-story mixed-use effort, which will feature 32 rental apartments as well as 14,000 feet of office space and a rooftop restaurant, has secured its $13 million construction loan as well as a $3 million bridge loan tied to the $3 million RCAP grant the project has been awarded from the state, Optima Durant Group President Garett Vassel said in a news release.

The office space is already taken before the first shovel breaks ground, as Vassel made a deal with Venture X, the coworking/shared office space provider that already has a large presence in Bethlehem.

Optima Durant’s goal during the COVID-19 pandemic was to resolve the financing for the project and guarantee the construction budget in order to maintain the development plan while seeking “greater efficiency in design in order to find a way forward,” the news release said. 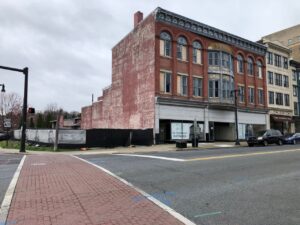 The developer also worked with Met-Ed and the Grand Eastonian for an easement that would “deliver the 2,200 amps (of power) needed” for the project, Vassel said.

Developer Borko Milosev, who rescued nearby 118-120 Northampton St. from the wrecking ball, had said that slice of the city has issues with electricity.

Abatement is completed inside the building, Vassel said. Part of the large and added-on-to structure will be taken down to make way for significant new construction, but the original front will be retained, Vassel has said.

Easton Mayor Sal Panto Jr., who has overseen the neighborhood’s renascence, said Vassel brings something extra to the table.

“I am excited about this project as it will bring a new dimension of mixed uses to our city,” Panto said.
The 100 block of Northampton Street is the “gateway to Easton”, Vassel said, and visitors crossing the free bridge from New Jersey in a little more than 18 months will be greeted with Vassel’s completed contribution to the stunning recovery of the city’s Downtown.

“The project has been a journey. There has been considerable challenges, both controllable and non-controllable, but we have not panicked. We have stayed positive and resilient. We have focused our attention on solutions and greater efficiencies. I made a promise, and I intend to keep it.”