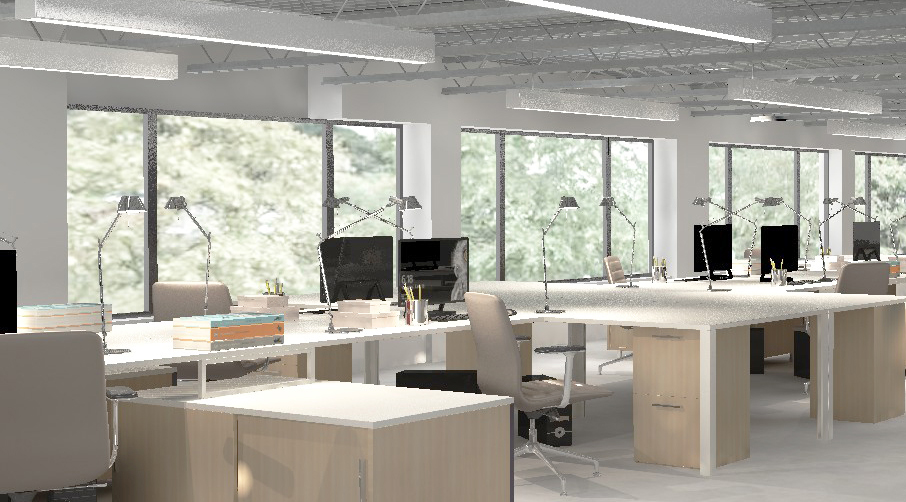 The developer of a proposed building called “The Commodore” at Northampton Street and Larry Holmes Drive in Downtown Easton has added a floor and expects to fill it and a mezzanine level with 15,000 square feet of office space.

The rest of the 91,000-square foot project is not vastly changed from the original pitch earlier this year for the old Kaplan’s Enterprises building, Garett Vassel said Monday. Plans still call for 31 apartments, a 6,200-square-foot rooftop restaurant, two lobbies, a 1,600-square-foot gym for tenants, a total of 1,700 square feet of street-level retail space, 14 integrated parking spots and a 1,200-square-foot open-air courtyard.

Vassel is in discussions with Fortune 500 companies as well as mid-sized Lehigh Valley companies to lease the office space, which is triple the original design, he said. Whether it be one tenant or more companies or a WeWork space, he said, it will fill a need in the city and also enhance Easton’s reputation with its already “revitalized business scene, culture, cuisine and nightlife, plus its family-friendly vibe and accessibility to nature.”

Vassel’s Optima Durant Group is prepared to build the space on spec and, based on the city “evaluating possible infrastructure upgrades within the telecommunications realm,” be able to present an opportunity for a large company to “have a regional office at a significantly lower price than in a major city.”

The building, at one of Easton’s gateways as it sits across from the Easton-Phillipsburg free bridge, will be eight stories plus a mezzanine but will not require a height variance, he said.

A 350-square-foot “semi-private” lobby will be built on the east side of the lot and will allow access to the office space and the restaurant, Vassel said. Public use will not interfere with the residential portion, which will have another lobby between the current store fronts, he added.

Much of the rear of the building is being torn down and replaced by a taller building and much of the office space will be new construction as it wraps around the old, he said.

The project at 100 Northampton St. has already been through the zoning phase with the city and Vassel expects by August to go through the formal planning and historic reviews and follow that with the permitting process.

In this scenario, demolition and construction would begin sometime in the autumn and the development would open in fall 2020, he said.

The “goal is in front of me and it’s on track,” Vassel said about planning and financing the project.

That the Hearst Corp. is bringing up to 175 jobs to the Heritage Riverview development in the 100 block of South Third Street is only good news to Vassel as he markets the city’s attributes to possible office tenants. Hearst employees could eventually live in The Commodore, he said.

He says he is a huge “cheerleader” of Lou Pektor’s project which is underway and expected to be complete by year’s end.

By adding office space rather than more apartments, Vassel figures he’s making the city a better draw for businesses.

“I’ve got a lot of interest already,” he said, even companies willing to sign letters of intent. It would be great to have the office space signed off on before construction starts — as happened for most of Heritage Riverview — but it’s not essential, he said.

The number of office jobs is dependent on the use but Vassel figures it will be a “fair amount.”

He calls both residential and commercial interest “astounding” in his project.

Optima Durant Group is a fully integrated real estate company that focuses on development, construction, design and property management. Optima Durant, the motto of the founder’s primary school, translates to The Best Endures. The Company was founded in 2017 and pursues projects within the New York, Pennsylvania, and Texas markets.